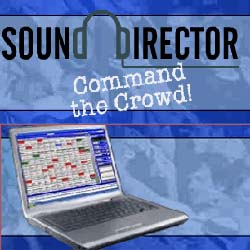 Sound Director is the “next generation” or evolution of Game Ops Commander — the industry leading audio presentation software for live events for over fifteen years.

Game Ops Commander was designed by the Portland Trail Blazers, a sports team frustrated with conventional technologies used in game operations such as CDs, cassettes, broadcast cartridges and digital sampling keyboards. Even though they were using the best of traditional arena sound technology, it just wasn’t up to the fast pace of sporting events. Their solution was to marry the high fidelity sound capability of the personal computer with the speed and interactivity of multimedia software.

In 1992, they prototyped the first version of Game Ops Commander. The next year, a full-featured version of “GOC” was written and tested at Portland’s Memorial Coliseum during the Blazers 1993-94 season. The results were remarkable. For the first time, equipment was not a handicap. Timing was dead on, every time. No more CD-juggling, no more broken tapes, no more fast-forwarding and rewinding, and no more dirty tape heads. In short — no more headaches.

The prototype was enhanced, and other capabilities were added. Encouraged by their success, the Blazers began marketing the software to other sports teams and facilities in early 1995.  As the installation base grew, Game Ops Commander also grew and the company began a roll out of additional game presentation products and services as well as newer and more advanced versions.

In 2007 we introduced the next level of the product — Sound Director.  Sound Director is the evolution of the original Game Ops Commander software. Sound Director adds an extensive assortment of new features, a redesigned user interface, and even video capabilities.  Sound Director has quickly become the new standard in game day production. The product line includes three version of Sound Director,  fully integrated turnkey systems, and a line of in game sound effect compilations.